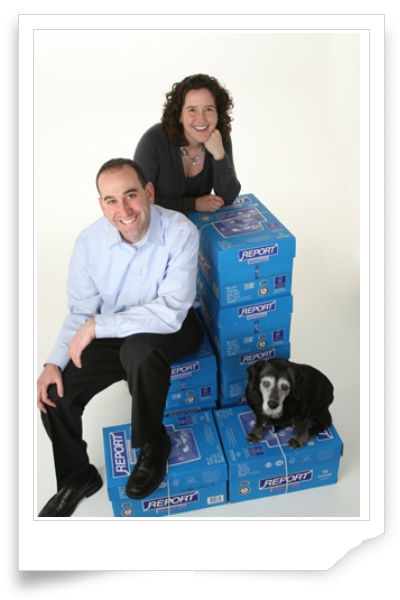 We are excited to announce that Michael was selected as a Business West 40 Under Forty recipient in 2009!

Michael wanted to include Lindsey and Weezy in his photo because they work as a team and represent what our customers have come to identify as the Minuteman Press family. 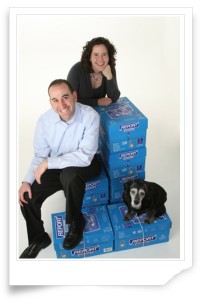 We have posted Michael’s interview below:
Age 29: Owner, Minuteman Press Michael Weber knows a secret about how to succeed in business.
“It’s such a cheesy statement,” said the 29-year-old, who owns and operates Minuteman Press in Enfield, Conn. with his wife Lindsey. “It’s the more you give, the more you get. Givers gain. If you want to succeed, you have to help out and contribute something.”
The formula has worked – the Webers have increased sales by 450% in the five years since they purchased the business.
Weber takes his volunteer work seriously. He is vice president of the North Central Connecticut Chamber of Commerce, a director of the Young Professionals Society of Greater Springfield, and a member of the Home Builders Assoc. of Western Mass. and the Affliliated Chambers of Commerce of Greater Springfield.
He joined these organizations immediately after moving from Boston to Connecticut and taking over the Minuteman franchise. His motivation was to make friends, make a difference, and form relationships that would result in business accounts.
Although his approach has worked, Weber’s intent is always focused on the greater good. “I want to do my part by helping people out and genuinely contributing,” he said, adding that he has supported beneficial initiatives even when they were not good for his business.
Many of his volunteer activities involve working with people who are much older, so Weber especially enjoys his affiliation with the YPS.
“It’s refreshing to be on board with so many like-minded people. I truly have good intentions and try to contribute,” he said.
His background is in information-management systems, and his wife was an assistant buyer for Filene’s Corp. prior to their venture with Minuteman, but both know the value of networking. “We don’t wait for people to come in,” said Weber. “You have to get to know people. We set quality standards, volunteer, and participate on committees. You have to get involved, and if you show up to help, you get to know everyone.”