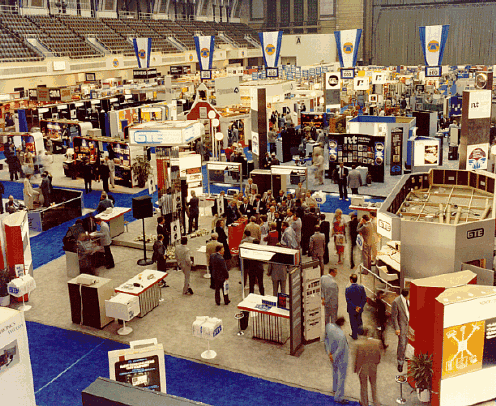 Postcards command attention in a stack of mail.  Your logo and message are instantly visible, not hidden inside an envelope.  Reading the material requires little effort on the part of your prospect. Postcards also mail at an attractive postal rate, and even more so if you meet the bulk quantity of 200 pieces.  Postcards print efficiently and are an economical choice even when using a glossy, thick paper.

In the weeks before a major trade show, we helped a medical device manufacturer communicate with his prospects using postcards.  He wanted to encourage his prospects to visit his booth to see a new product.

Each prospect received one postcard a week for the three weeks leading up to the show.  The postcard had a clear message , colorful graphics, and chance to win a valuable prize at the show.

The results were amazing.  Our customer had one of the busiest booths during the entire show.  Prospects were lined up for a chance to speak with him.  As the visitors approached his booth, most of them were holding his postcard in their hand.  He came back from the show and was brimming with good news to share with us.

The impact of these postcards speaks for itself.

Postcards are an effective and affordable way to communicate with your prospects and customers.  We encourage you to try postcards for your next new product announcement, trade show booth, open house, or promotional event.  Please contact us to discuss your project ideas.  We’d love to hear from you!